Last summer our country saw a large influx of women and children migrants coming from Central America to our Southern border. Many of these migrants cite violence and insecurity in their countries of origin as their reason for fleeing. 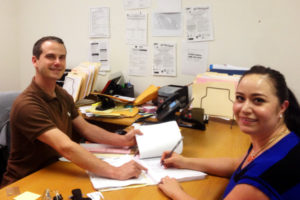 According to data compiled by the Igarapé Institute, a Brazilian nonprofit, a third of murders worldwide occur in Latin America, a region containing less then one tenth of the world’s population. It is no coincidence that the vast majority of Central American migrants arriving in the US come from three countries with some of the highest rates of homicide and violent crime in the world, outside of conflict zones: Honduras, El Salvador and Guatemala.

While overwhelming evidence supports the fact that an increasing number of Central American migrants are fleeing violence in their countries and have valid claims for international protection under our existing immigration laws, our government has responded with policies that emphasize enforcement at the expense of compassion and due process. One example of this is the Obama Administration’s policy of detaining family units, women traveling with their children, as a deterrent to future immigration.

According to US law, immigration enforcement agencies are required  to implement a policy that favored release and reunification with family members for unaccompanied children apprehended at the border. Since then, federal judges have determined that these protections extend to all children in Immigration and Customs Enforcement (ICE) custody. Despite these rulings, the number of migrant families held in restrictive and inhumane conditions at detention centers has increased.

Compounding their plight, immigrants in deportation proceedings have no right to counsel. Recent data released by the Department of Justice to the media organization POLITICO indicate that unrepresented children in detention proceedings were nearly five times as likely to receive a deportation order or accept voluntary departure than those who had legal counsel during a nine month period beginning in July of last year.

As a staff member in Catholic Charities of the East Bay’s Immigration Legal Services program, I interact everyday with immigrants who have suffered trauma and fear returning to their countries of origin due to increasing violence. My experience working in immigrant communities in the US over the past three years has inspired me to dedicate my life to advocating for those fleeing persecution.  In furtherance of this goal, I am leaving CCEB at the end of May to study law at University of California, Irvine. Before I start school I will be traveling to South Texas to volunteer with the Refugee and Immigrant Center for Education and Legal Service (RAICES) at the Karnes family detention center. From there I will travel on to Guatemala and Southern Mexico to familiarize myself with root causes of Central American migration and the conditions migrants face on their journeys to the US.

As I leave CCEB I am proud to have been part of an organization that is developing into a leading partner in the response to the current Central American refugee crisis. In the past year, we have implemented new legal service offerings for unaccompanied child migrants from Central America. And, our refugee resettlement and immigration programs are working in collaboration to begin clinics aiding qualifying Central American children who are seeking international protection to petition for refugee status in their home countries rather than making the desperate overland journey to the United States to seek asylum.

Religious congregations and civil society organizations have been at the forefront of advocating and implementing a humanitarian response to refugee crises throughout our country’s history. Notably, Catholic congregations and other faith-based groups spearheaded the Sanctuary Movement in the 1980s and 90s that provided protection to Central Americans fleeing violence and repression stemming from the civil wars devastating their homelands. Our organization and community must continue this tradition of advocating for and implementing a humanitarian response to those seeking refuge in our country.