My soul is weary with sorrow; strengthen me according to your word. – Psalm 119:28…

There are times when the city of Oakland elicits strong, contradictory emotions. Last night’s world premiere of Wounded Places was a very special celebration of an important film. The packed house at The Grand Lake Theater was engaged and at times vocal throughout the screening and panel discussion that followed. However, the subject matter itself is something that should shock and sadden all of us. The film visits the tough neighborhoods of North Philadelphia and East and West Oakland, chronicling the stories of children shaken by violence and adversity and asks “How can traumatized children and neighborhoods heal?”

Mayor Libby Schaaf summed up a lot of the feelings in the room when she said, “I am so proud to be mayor of my hometown of Oakland. We are a proud city, proud of our diversity and inclusion; of our industry. We are gritty, real, and authentic. But there are moments where I don’t feel proud – there is still so much harm done every day.” Indeed, for all of the progress that has been made in making Oakland one of the “Top 5 Places to Visit” in 2012 according to the New York Times, there is still so much more work to be done.

The film itself taps into contradictory emotions. A very grim case is made for the state of affairs in our wounded places, where for many, hope has been lost. When viewing the film, it’s hard not to feel that despair. However, there are glimmers of hope. Catholic Charities of the East Bay’s RTIPS program (Restorative Trauma-Informed Practices) features prominently as one solution that is working. The innovative program provides mental health treatment and trauma counseling to adolescents experiencing multiple, ongoing incidences of trauma. It approaches restorative justice practices, which focus on building relationships, through the lens of understanding the underlying trauma. It doesn’t ask, “What’s wrong with you?” It asks, “What happened to you?” 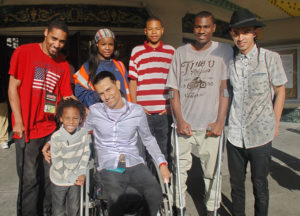 Javier Arango, one of Catholic Charities’ youth engagement specialists, is profiled in the film. Javier knows better than most the impact of gun violence. When he was 17, he was a member of a gang, and was shot and paralyzed on the streets of East Oakland. “There’s new guys being put into wheelchairs. Giving them that little sense of hope that there is a life to continue, that gives me more hope for me myself to continue what I am doing.” Later, during the panel discussion, Javier was emphatic. “What matters is to keep on going forward. Teach your kids how to grow up, be good people, to enjoy life.”

What made the premiere special is that to a person, there was a strong belief that by partnering, we can make a difference, and that we can move forward in healing. As Carla Keener of First5 Alameda said about their work with Lotus Bloom, “We were provided funding. However, we came in not to usurp but to partner with the groups doing great work. Whoever wants to come along side us, we are here to provide hope and healing.”

Mayor Schaaf was also optimistic. “I am excited by the work being done here to stop the violence and punishment and to start the healing.”

Interested in Wounded Places? Check out the trailer here and look for it on your PBS station this Spring.