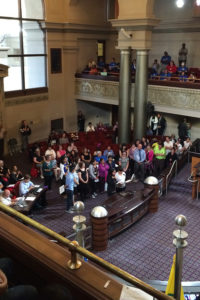 The gathering at City Hall Council Chambers was highly attended

The City Council Chambers were quiet as the boy approached the microphone. He is new to this country, unable to speak English, but he knows the importance of the democratic system we enjoy. It was this very system that was responsible for him gaining asylum to stay in the United States. Now, with a steady voice that no doubt hides his nerves, he pleads the case for others like him.

The boy came to the United States from his native Honduras as part of a wave of “unaccompanied minors.” Risking deportation proceedings, he benefited from pro bono legal services provided to him through Oakland city funding. He was granted asylum to stay in the United States, and he is grateful for the legal representation he received. Without it, he would surely have been returned home, where he faced the wrath of the gang that he fled. Unfortunately, extension of that funding was not part of the City Council’s draft budget, and was in serious jeopardy.

The boy came to the podium, backed by a group of supporters. Through a translator, he told his story, and he urged the Oakland City Council to vote for an amendment that would restore funding of legal services for unaccompanied minors. He was followed by the testimony a young lady from Guatemala. Their brave voices resonated throughout the chambers. 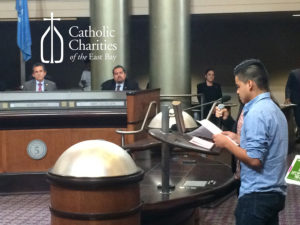 After hours of testimony and deliberation over a wide array of amendments, a budget was finally passed around midnight. With the support of City Council President Lynette Gibson McElhaney, as well as Councilmembers Noel Gallo, Abel Guillen, Dan Kalb and Rebecca Kaplan, it included $300,000 for unaccompanied minors.

“We are pleased that through this funding, Catholic Charities can continue to save the lives of the most vulnerable in our society,” Said Christopher Martinez, director of legal services at Catholic Charities, a part of the Oakland collaborative that will receive the funding.   “We also want to thank the City Council for their support.” 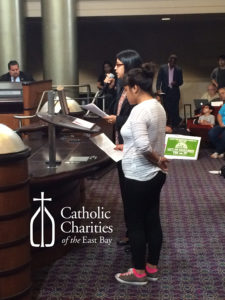 Standing tall and being heard

Despite the eleventh hour approval of the budget, more work needs to be done. The 2016 funding is just over half the current year funding of $577,000. “We fear that this is insufficient to the overwhelming need for these services in our city,” continued Mr. Martinez. “Moving forward, we will urge the City Council to expand this program. But for now, we celebrate this victory.”

The boy was no doubt in bed by the time the vote came down. However, by standing tall, he made a case for others like him. By speaking out, he helped save the lives of others.