Saint Mary’s Study Reveals the Truth About Being “Relevant”

As I mingled with the students in the parish hall of Saint Ignatius Church, in Antioch, I was reminded of a recurring dream most of us have. It was the one where you show up for the final exam and you realize you are dreadfully unprepared. That one gives me shivers every time.

There was a nervous energy in the air. In a few minutes, 21 undergraduate students from the B.A. in Leadership & Organizational Studies (BALOS) Cohort of Saint  Mary’s College in Moraga would present the findings of their Capstone Project. Many of them were well into their 30’s and 40’s, working for companies like Kaiser Permanente, AAA and GE, serving their communities on the San Francisco Police Department, or running their own businesses. Despite that considerable work and life experience, this represented the culmination of two years of work. They were understandably anxious.

For the Capstone Project, the BALOS cohort were tasked with the following: “Partnering with a non-profit community organization, students plan and implement a community-based research project that will help the community partner meet their needs and better serve the community.” Over the next 9 Weeks, they would organize into 11 Teams with 18 Different Leaders and perform over 2,900 Service Hours to complete the project.

In April, Debra Gunn, development director at Catholic Charities of the East Bay, and Stephen Mullin, parish outreach coordinator, met with the cohort and presented them with an assignment. In an effort to be relevant and responsive in this underserved part of the Diocese of Oakland, they asked them to identify and prioritize needs and existing resources so that the agency can coordinate effective services for their constituency. The goal would be to have a plan of action to serve the communities in East Contra Costa County, and especially the parishes in in the region. Those include Saint Ignatius and Most Holy Rosary in Antioch; Our Lady Queen Of The World in Bay Point; Immaculate Heart of Mary in Brentwood; Saint Anne in Byron; Saint Anthony in Oakley; and Church Of The Good Shepherd and Saint Peter Martyr Of Verona in Pittsburgh.

It seemed like a straight-forward task. As the cohort accepted the project, they would come to realize that there were significant challenges – and opportunities -ahead.

What is so unique about Project Pathfinder is how it adheres to Catholic social teaching. “Most people respected that it was about the greater goal, not just the grade. This was for the greater good,” explained Jeffrey Virgin, who served as co-lead on both the survey team and the analysis team. Talk about added pressure.

For starters, this was going to push the members of the cohort out of their comfort zone. “It was the first time for a lot of us working together, from various backgrounds, embarking on a project where most of us had no experience with this type of research,” explained Shane Tarum, who was responsible for much of the early research. “Communication was the biggest thing, and learning how to organize and structure our groups was crucial.” 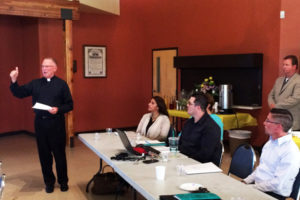 Rev. Robert Rien of Saint Ignatius Church in Antioch is eager for Catholic Charities to be more relevant in his parish.

Those were internal challenges. Externally, they surveyed Catholic Charities’ target audience and demographic. They found that nearly 70% of respondents were not even aware of the agency’s services. On top of that, responses demonstrated how very different the needs and concerns of Antioch and Brentwood are, despite geographic proximity.

Research also indicated that while there are many needs in Antioch and Brentwood, there are existing agencies in place. Collaboration with those resources – what we term “Alliance Equity” – would be crucial to coordinating and providing effective services.  Catholic Charities’ “Faith In Action” social services directory is already a step in that direction.

However, becoming relevant doesn’t happen overnight, and that was the true takeaway from the study.

“I was a runaway; I was in the foster system. Being relevant is important,” explained Ralph Sabiel, one of the members of the cohort. “I was fortunate that someone reached out to me and acted on their faith. They helped me become accountable and self-sufficient.” At Catholic Charities of the East Bay, our goal is to be relevant in the communities and parishes we serve as we strive to move families from crisis to stability to self-sufficiency. In Eastern Contra Costa County, we are embracing the challenges and opportunities ahead to do just that.