Would You Drop Everything to Work in Fast Food?

Imagine leaving your home, your career, everything you know, to take a job in an East Oakland fast food joint. With all due respect to the fast food industry, why would anyone choose to do that? The question should be, “What would force anyone to have to do that?”

Ghafoor and Teressa Shahzad with their children in their new home.

Earlier this year, Catholic Charities of the East Bay welcomed our first refugee family from Pakistan. Their story dispels so many myths about refugees coming to the United States. Ghafoor and Teressa Shahzad did not choose to leave their homeland to come to the East Bay. They were forced to leave everything behind and flee to a country where they could live safely and practice their Christian faith. This is their story.

The Shahzad family is Christian, which is a small religious minority in Pakistan. They owned a nice, two-bedroom home in a Christian neighborhood in Lahoor that they shared with their four children. Ghafoor had a good job as a human resource specialist for a software company. However, he experienced a gradual change in mood over the last twenty years. “Discrimination and extremism is on the rise,” Ghafoor explained. “Pakistan is a beautiful place – I would love to live there. But if you are Christian, you will be persecuted.”

By 2012, he feared for the safety of his family. His brother-in-law had been murdered by extremists for “blasphemy” after expressing his religious faith to a co-worker. Later, his brother was jailed and subsequently murdered for a similar “offense.” Ghafoor himself was targeted and beaten for visiting his brother while in jail. He made the decision to sell their home and move to Thailand. “It was better to flee and be alive.”

Life in Thailand was not easy. The family of six lived in a single room. Ghafoor applied for refugee status in the United States while working at the Bangkok Refugee Center. Fortunately, his children all received scholarships to attend the International School in Thailand, where they received a good education.

On his way home from work one day in February of this year, Ghafoor was arrested for overstaying his visa. He was sent to a detention center and told that there was nothing he could do. “I feared that they would send me and my family back to Pakistan.” His son Naaman visited the local office of the International Rescue Committee (IRC). They were able to help. Instead of being deported, Ghafoor was told that he could pay a $1,500 fine for himself and $750 for each of his family members. It was a lot of money for the family to come up with. “But I had trust in my living God, and He provided.”

In April, they finally received the news that they were eagerly awaiting. The Shahzad family were approved to move to the United States. As with all refugees, this was not the end of the arduous journey. One of Catholic Charities of the East Bay’s refugee resettlement case managers met the family at Oakland International Airport. They arrived with just the belongings they could fit into their suitcases. 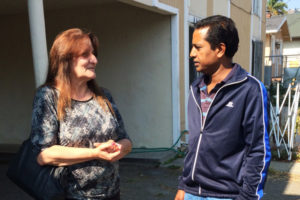 Hana Thoma, case manager for the Shahzads and Ghafoor

Hana Thoma, the case manager assigned to help the Shahzads acclimate to their new home, put them into a motel for a week until she could find them affordable housing. She also assisted them with their social security applications, health screenings, and other social service appointments.

“Their case was unique,” explained Hana. “They were a ‘free case’ meaning they didn’t have a local sponsor family.” Fortunately, Augustine Gill, a former Catholic Charities employee who came from Pakistan, took notice. He personally helped them with home furnishings and clothing.

Ghafoor, Tereesa and their oldest son Naaman all worked with Tluang Salai in Catholic Charities’ refugee employment program. Fortunately, all three of them speak excellent English. Salai was able to place Ghafoor and Naaman in jobs within three months of their arrival, which brings us to the beginning of our story. Ghafoor works an entry-level position in a fast-food restaurant. Naaman works in a warehouse. They had left everything behind to take the most menial of jobs in their new country. It is a sacrifice many of us cannot fathom. 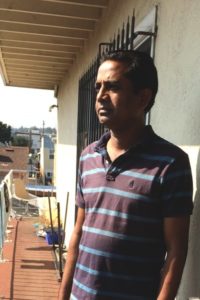 Gafhoor Shahzad looks with confidence to the future.

Catholic Charities enrolled the Shahzad family in Family to Family. It is a unique partnership between Catholic Charities and 24 parishes in the Oakland Diocese. The program creates a relationship between a low-income family and the team of volunteers within the parish with the ultimate goal of mentoring the family to a level of economic sustainability. One of the immediate impacts is that Ghafoor is interviewing for a better job with benefits for his entire family.

After years of persecution and sacrifice, their story continues. Like so many new arrivals to the United States, they appreciate that there is a lot of work to do. “I am confident of the future,” Naaman said. “I will work hard, and study hard, and one day I will own a house. There is opportunity for everyone in America.”