Sometimes a Kid Needs Help to Get That Second Chance

I just graduated from McClymonds High School in West Oakland. Like any school, there are “good kids” and those that we consider “bad kids.” When you’re a “bad kid,” that’s most likely how they’re going to see you for life. That doesn’t seem fair. They still have so much time ahead to grow – they’re only kids, after all. 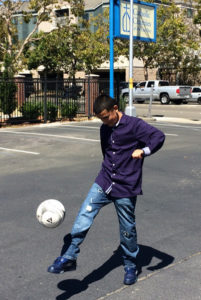 Abel plans to try out for his high school soccer team.

Last week, I met Abel, who has been on both ends. As a middle schooler, Abel has undergone a lot changes in his life. I had a chance to hear his story, and perseverance, growth, and determination are a few traits to describe him. Like everyone, Abel has made past mistakes, but learning from them is what made Abel into the person he is today. However, he probably would not have been able to do that on his own.

In 6th grade, things became very difficult for Abel. He suffered from depression, did not take school seriously, and had a troubled life at home. He had attachment issues with his parents. “I was afraid that my parents would leave me and never come back.”

Over time, that depression and fear turned into anger. Many of his friends were into gangs and he began to make some really bad decisions. He stopped going to school, and his relationship with his parents became worse and worse. “During this depression, I had no one to talk to,” he explained.

At about this time, Abel began working with case managers from Catholic Charities of the East Bay. The Catholic Charities RTIPs is an approach to working together that emphasizes pro-social behavior such as empathy, self-regulation, personal responsibility, accountability and dialogue. An RTIPs team was in Lavonya Dejean Middle School where Abel was enrolled.

He began meeting with Javier Arongo, one of the RTIPs youth engagement specialists. Through group meetings and one-on-one meetings, they developed a relationship. They built trust with one another where Abel could tell Javier his problems. “Javier would tell me everything will be ok and that will make me feel better. Other kids would call me stupid but they don’t know how I felt,” Abel told me.

As an 8th grader, Abel began working with Gimone Bryant, a clinical case manager in the RTIPS program. Gimone helped him set high goals and standards for himself. Gimone was instrumental in working with Abel’s teachers and staff. Together, they established a silent indicator between Abel and his teachers when he became triggered in class. When he feels there’s a problem coming, he was permitted to go outside and take 2 minutes to redirect himself. By taking that time he is able to focus and avoid the problem. As a result, Abel is able to focus on school and his goals. 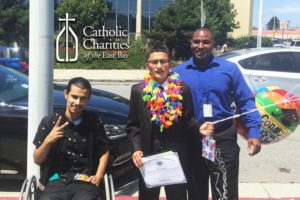 The result of their work was remarkable. Abel found that he could begin to redirect himself before a problem occurred. He also began achieving his goals by getting better grades in school, not acting out and getting suspended, and building a better relationship with his parents. “Working with Abel and agreeing to the two minutes outside the classroom has shown that he can sense a problem coming before it reaches a crisis,” explained Mr. Bryant.

Abel’s life has been transformed. He has been accepted to the Leadership Academy, a prestigious high school that accepts only 200 students per year, and has aspirations to become an FBI agent. He has a strong, loving and caring relationship with his parents. And he has dreams and goals for the future.

“Catholic Charities has helped me become a better person,” Abel told me. “They helped me achieve my goals. It changed my life so it can change other people’s lives too.”

Abel’s story is an inspiring example of perseverance, growth, and determination.

Janiero Rodriguez spent a Summer internship at Catholic Charities of the East Bay. A recent graduate of McClymonds High School in Oakland, he is matriculating to Arizona State University where he will study sports media and play football. Janiero interviewed Abel and Gimone Bryant for this story.
← Previous Post Next Post →