With President Obama’s executive action last November, our nation took a step toward a more compassionate immigration system that respects the inherent dignity of immigrants as fellow daughters and sons of God. After months of preparation, Catholic Charities of the East Bay were eager to expand on our mission of “Welcoming the Stranger” by assisting the thousands of newly eligible immigrants with their applications for the Deferred Action for Childhood Arrivals (DACA) this week and Deferred Action for Parental Accountability (DAPA) in May. 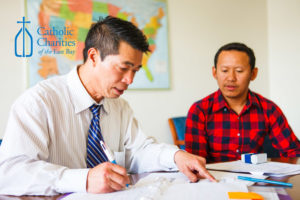 On Monday, a district court judge in Brownsville, Texas issued a preliminary injunction that temporarily blocks the implementation process of President Obama’s executive actions. The Justice Department has filed an appeal and, despite the delay, Catholic Charities is confident the US Fifth Court of Appeals will overturn the Brownsville ruling.

The eleventh-hour injunction may confuse, frighten or discourage eligible immigrants from applying. However, we believe that this is just a temporary setback. This decision does not affect the current DACA program that was announced in June, 2012. It only delays the new executive actions announced by President Obama in November, 2014. We encourage applicants to continue moving forward with the process and to get ready to apply. Save your money, start gathering your evidence, get your passport or IDs, and stay informed.

We also caution applicants to be wary of scams and avoid falling victim to immigration fraud. Notarios, notary publics, and immigration consultants may not provide legal advice or represent people before the United States Citizenship and Immigration Services (USCIS). By law, the only people who may give legal advice or representation before the USCIS are attorneys and non-attorney representatives who are accredited by the Board of Immigration Appeals (BIA). For more information on attorneys and BIA-accredited representatives, please visit www.uscis.gov/avoidscams.

In the meantime, Catholic Charities and other community partners are hosting a community stakeholder gathering on the new executive action on immigration. This meeting is for local and county governments, faith based organizations, health care providers, libraries, educational institutions, organized labor, chambers of commerce, domestic violence treatment programs, immigration advocacy groups and all who want to understand how the executive action on immigration will benefit their community.