Catholic Charities: Being Relevant and Responsive In the Diocese of Oakland

Last month at the Clergy Training Day, a group of Catholic Charities of the East Bay staff presented two new resources for the parishes. This is an annual training for all clergy and seminarians of the Oakland Diocese and this year there were some 150 priests and soon to be priests. 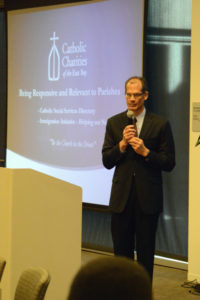 The first resource was our new online Catholic Social Service Directory that has over 55 human service agencies. This online resource (www.FaithInActionOakDiocese.org) was developed by Catholic Charities to connect priests, staff, and parishioners with the social services in their parish area such as addiction, homeless, mental health, health care, and domestic violence services. It can be accessed on a smartphone or computer.

The second resource was our Immigration Initiative where we will have five monthly regional education workshops in the parishes beginning in April. We call this Immigration 101 where we present myths and facts around immigration to better educate those who want to learn more. 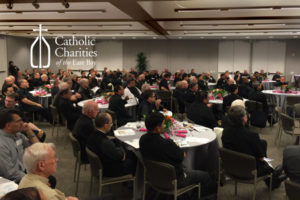 Priests assembled during the training

The response by the Clergy after our 40 minute presentation was so overwhelmingly positive. We were humbled. Many of the priests came up to us with extended hands of congratulations and hugs of appreciation and warm wishes. Christ said He was going to build His church with “a community of real people that would be attentive and responsible to each other and quick to extend mercy and grace and love.” The clergy did that despite our past failings.

As Chief Executive Officer so much of my day is spent fixing problems while also trying to advance our mission. Catholic Charities is a living, breathing, constantly evolving organism. We get to decide how we care for, hold up, listen to, and support each other, especially when things aren’t going so great and when there’s so much to do.

When Christ had a vision for his church, He thought of love, acceptance, forgiveness, vulnerability, and interconnectedness. I can just imagine Him saying as He was looking down on our presentation and the warm feelings felt and expressed by all that night – “This is my church.”

How can Catholic Charities be more relevant and responsive in your life? In the life of your parish? In the life of someone you know? Share with us your thoughts in the comments section below so that together, we can be Christ’s “church in the streets.”

With kindest regards until next time,